Xamarin Got Everything You Need to Build Great Mobile Apps 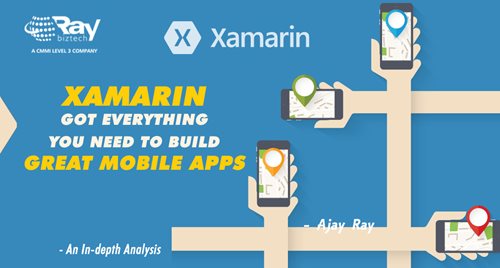 Developing a similar individual native mobile app to run on Android, iOS, and Windows need considerable time and efforts. On the contrary, developing a cross-platform native mobile app using a single framework reduces these efforts significantly. Xamarin is one such platform that gives an average of 75% of shared code and reduces development time by more than 60%.

Why Should you use Xamarin Forms to build an app?

Within the Xamarin ecosystem there exists native Xamarin (C# SDKs designed to run natively on iOS and Android) and the newcomer Xamarin Forms. Xamarin Forms was designed as a cross-platform SDK with the goal of having a single code base for iOS, Android, and Windows. As you can imagine, this is an excellent hybrid platform for anyone looking to build an app that works on multiple device types.

Xamarin allows components such as data access layers, business objects, and app logic to be shared across multiple platforms. That means, the core logic is written once and deployed across various platforms. Up to 90% of the code is shared across the three major mobile platforms leaving the rest to be platform specific. This ensures faster go-to-market. For instance, after developing an iOS app, if the enterprise plans to develop to write the code from scratch. However, Xamarin makes this job simpler to create an iOS with ready-to-use shared code.

It is highly inefficient and costly to learn, develop, and maintain different codes for the same application across multiple platforms. However, Xamarin requires only C# language skills. Developers can thus avoid spending time in learning separate programming environments as the single code works for multiple platforms. This diminishes the learning curve for the developers and accelerates app deployment.

Xamarin provides a ready-to-use component store. A collection of striking charts, graphs, UI controls, cloud services, beautiful themes, and various powerful features are readily available in the store. This helps the Xamarin consultants to add-on these components easily in minutes in Xamarin studio or visual studio to speed-up their mobile app development process.

With the global partnership of Xamarin and Microsoft, NET portable Class Libraries are made available with deep integration with Visual Studio. These also provide support to Microsoft Azure Mobile Service on Android and iOS. With this feature, a secure and scalable backend is created for multiple mobile platforms.

Xamarin works with the latest SDKs and utilizes some of the common and platform-specific APIs. It strongly binds APIs and SDks of multiple platforms to generate high-quality applications. This result in Xamarin mobile apps with the effective user-friendly interface. this unique SDK integration feature of Xamarin helps in providing support for new feature, as soon as they are inserted in the operating system of the device.

Xamarin output results in apps with fewer bugs due to its shared code technique. It becomes easy to maintain bug-free code, as the core application code is validated once for multiple platforms. Developers use Xamarin Test Cloud, a mobile app testing module, which helps in testing apps with fragmentation, reports, continuous integration, and object-based UI testing. Enterprises can use Xamarin Insight, a real-time app monitor module, which helps in monitoring the performance and health of Xamarin apps.

You Can Customize the Experience for iOS and Android

In the past, you had to decide whether you wanted to make an iOS or Android app because of the lack of cross-platform options. Now with Xamarin Forms, users have an extensive ability to tailor the user experience for both iOS and Android with one platform. By using Xamarin Forms for this type of application you can deliver your app to both Android and iOS, re-using a high percentage of the application code between each app platform, which translates to lower development costs and lower ongoing maintenance and support costs.