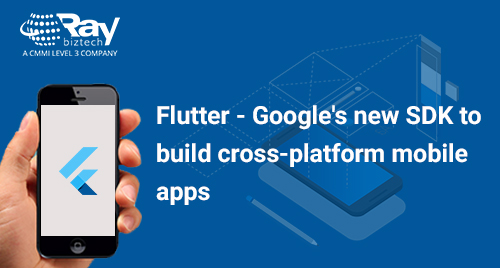 Mobile application development has grown into leaps and bounds with an estimated 2 billion, smart phones across the globe, majority of them running on either iOS or Android. In order to reach more users, developers need to target both of these platforms.

Flutter is a cross-platform mobile SDK developed by Google for designing premium native interfaces on iOS and Android. It uses Google’s own language - Dart. It is somewhat similar to JavaScript, as it has an optional built-in type safety support (the type safety is requisite for Flutter, but can be disabled for writing other projects).

Flutter also allows developers to re-use their existing Java, Swift, and ObjC code, and access native features and SDKs on iOS and Android. There are now more than 1000 packages those work with Flutter including SQLite, Facebook Connect, Firebase, shared preferences, GraphQL, and more. Finally, developers can build apps with Flutter using any text editor combined with Google’s command-line tools. There is also a Visual Studio Code plug-in for Flutter.

Expressive and flexible designs:
Flutter comes with a modern reactive framework along with rich set of widgets, animation libraries, and a layered, extensible architecture.

Flutter is at present available only for Mac or Linux with Windows to be expected in future. While it allows you to develop for Android or iOS, you do need a Mac for iOS development with Xcode 7.2 or higher and to deploy apps in the App Store you need to be a registered Apple developer.